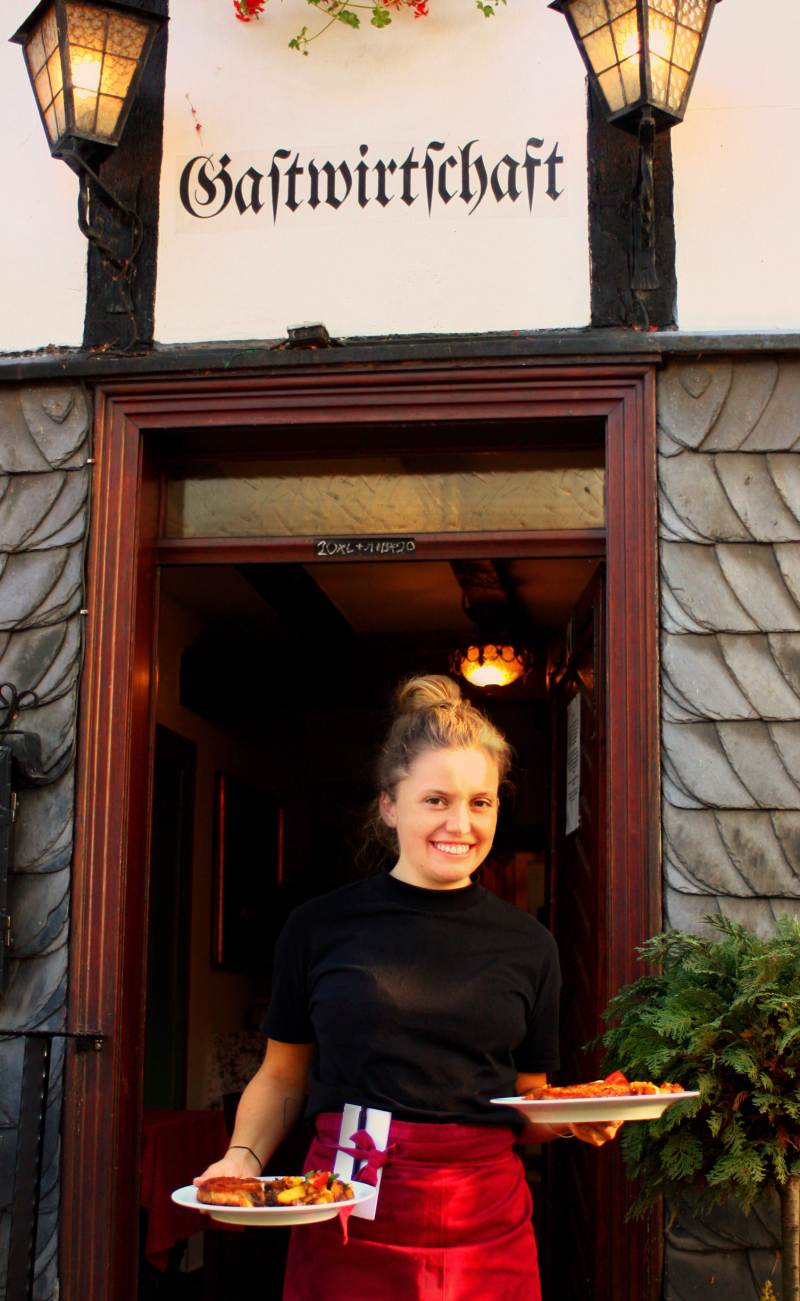 Although the world changed significantly (some might even say dramatically), "Am Alten Fronhof" has stayed an establishment where genuine hospitality, good and honest food and drink, and old fashioned peace and quiet can be enjoyed. Just ask yourself, what pops into your mind when I say “small Grimm-like German village”? Would it be a church with an old oak tree in front of it, a pub across, and a cemetery a little bit further down the road? Well, it looks like you just described what I see if I look out of the window here.
This “pub across the road” has been “Am Alten Fronhof” for more than 250 years now, nowadays run by the 5th generation of the same family. And while the world has been on the treadmill of “Bigger, Faster, Better”, the Fronhof stayed the quintessential “small village pub with sleeping accommodation”. Indeed, “Am Alten Fronhof” has stayed true to the values it has served its delighted customers for many years, which is no-nonsense quality, German cookery craftsmanship, and value for money. It even looks like the beds in their (in total) 3 rooms are still as warm and welcoming as they were when horse drawn coaches pulled up in front of it. But that might be just me.
So yes, its wines are lovely and its (Kölsch) beer is still as refreshing as it has been for centuries, without having lost itself in this “recent” fad that you should choose from 200 different kinds of beer. Or, as the landlord likes to quote the generations before him: “People have quenched their thirst here with this beer for more than 250 years, so I'm sure it can manage yours”. No worries though, although this is Germany, smiling is allowed. So close to Cologne, some might say it's even obligatory...
Knowing this, it will not surprise you that this same, hard to find, thought lost honesty and quality also (still!) applies here to all the other aspects of its hospitality. Its good honest cooking still serves cutlet sizes that make chain hotels worry about their bottom line. And if you're lucky enough to stay here at the right time, it might be that you can catch a German bite of their excellent, locally sourced asparagus, goose, or wild boar. Who said that only your Nan could cook like that? 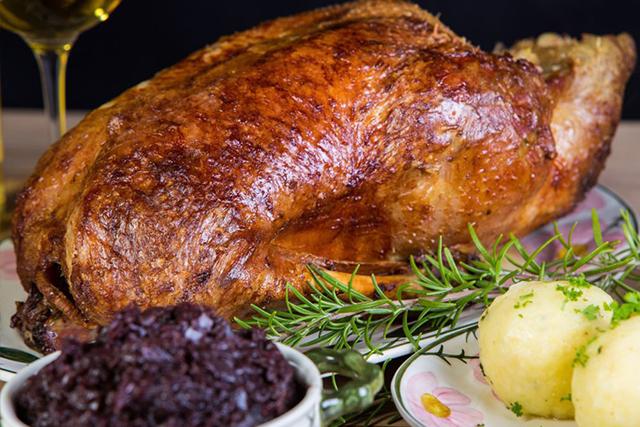 "Saint Martin, Saint Martin..."
Saint Martin's Day are festivities with a long tradition, which is celebrated on 11 November (also Carnaval!) each year in some, but not all regions of Germany. The feast was seen originally as the preferred time for the butchering of "Martinmas beef" from prime, fattened cattle, geese, other livestock and the ending of the toil of autumn wheat seeding (sowing). Children look forward to "Sankt Martin" because it means lantern parades and St. Martin's singing. As with many traditions, this old German one later, with the migration of people, transformed into something that will be very familiar to Anglo-Saxons: Halloween. During St. Martin's Day children also go from door to door, sing a song, and will ask for “Süßes oder Saures!”, which is (you guessed it) “Trick or treat”. There will be bonfires, children will gather in a public place, and a beggar there will approach a horse and rider, where (s)he will plea for help. Martin (the rider) will then remove his wide cloak and cut it in two, giving one half to the beggar, all according to the legend of St. Martin.
In addition to all this, St. Martin's Day is a day where the family comes together in the dark evenings of autumn, and enjoys a good meal together. A part of that is the St. Martin's Goose, which is traditionally eaten with red cabbage, baked apple, bread or potato dumplings. It is not quite clear why this tradition involves a roast goose specifically, but as with many legends and traditions, there are many possible solutions handed down during the centuries. One such legend is that a monk Martin hid in a goose house when he was about to be ordained bishop. But the geese cackled so excitedly that he was discovered and finally ordained bishop of Tours any way. More likely however is that the St. Martin's Goose was a part of the farmers' annual fiefdom, which was due on St. Martin's Day. As a rule, the duty to pay consisted of payment in kind, often a goose, which was then immediately eaten as a festive roast in honour of Saint Martin. Eating goose at "Am Alten Fronhof" honours this centuries old tradition, which we would be delighted to share with you. 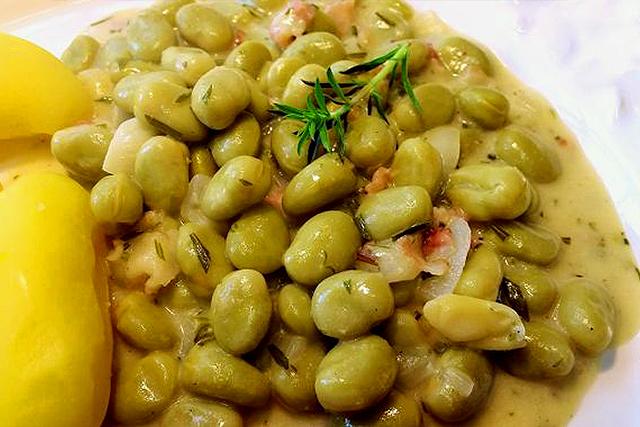 If you translate this literally, you end up with "fat beans". These are of course what Anglo-Saxons call broad beans. The Germans of the Rhineland regard this humble bean one of their favourites and go crazy for it. There will be always somebody around who will tell you that they (the Rhinelanders that is) have been eating "Decke Bunne" since the days the Romans were still stationed in Cologne. And indeed, that's true... Well almost. If you look into the story of the broad bean, it turns out that it is a pretty travel-happy vegetable. Oh, and that they weren't fat at all originally. A thin variant was first found in archaeological excavations in a Stone Age settlement near Nazareth in Israel, dated about 7000 years BC. It's not clear whether these were collected wild or cultivated, so really grown purposely beans. Around 300 BC, the broad bean was known in the Mediterranean region, and during the first centuries after Christ, it turned up at the North Sea coast, no doubt helped by the fact that it grows very well on salty soils near the coast. In the Middle Ages, it was promoted to one of the most important foods for people, no doubt due to its high yields. It was also during this period that the "fat" variety first appeared, which still exists today. In the Cologne region, and at "Am Alten Fronhof" particularly, these beans are still served and eaten during special occasions like for example the Herkenrath "Decke-Bunne-Kirmes" funfair!

Asparagus from the region 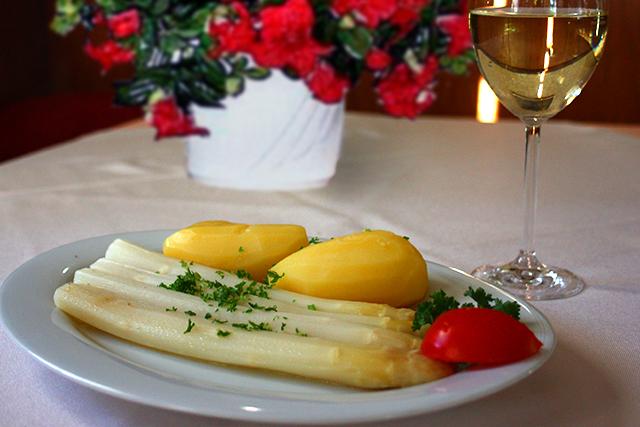 One of the pleasures that delight our customers every year are our dishes with asparagus from the region. The fact that they come from the region is one of their key qualities. After all, asparagus is a spring vegetable that allows only a small window of opportunity for enjoyment after harvesting, losing its flavour and aroma every hour they're above ground! So, when they come from abroad, they will have had a "taxing" journey, no matter how fast (or cold) that journey was. That's why "Am Alten Fronhof" only works with asparagus grown in the Bergisch region. And harvested just before they land on your plate. 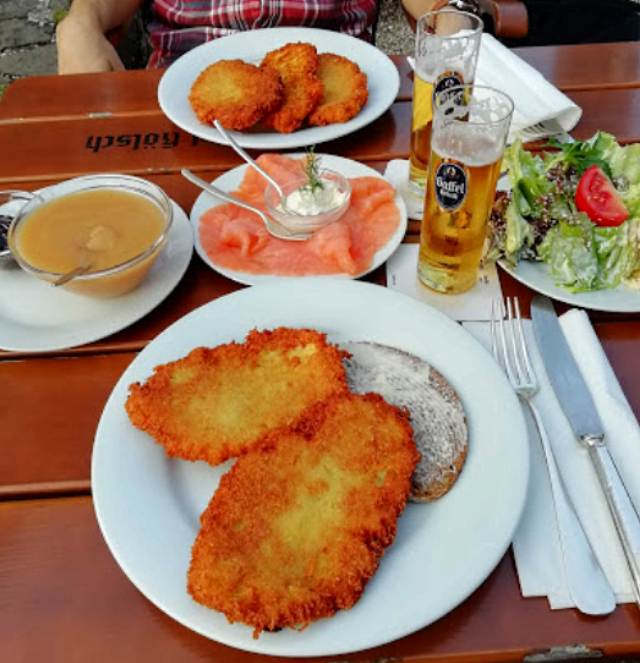 In the traditional gastronomy of the Rhineland, Friday - a no-meat day officially by tradition - is often the so-called "Reibekuchen" day. In Cologne, where in local dialect they are known as "Rievkooche", the small stalls where you can buy them are often a traditional part of Christmas markets and fairgrounds. In some places, potato pancakes are part of special potato festivals, e.g. in Wülfrath and at the "Tolle-Knolle" potato fest in Ibbenbüren. Depending on the region, potato pancakes are eaten together with salty or sweet ingredients such as apple sauce or sugar. In the Bergisches Land, Münsterland and Rhineland, potato pancakes are also placed on buttered brown bread or eaten with beetroot, apple sauce or jams. Who said that you have to be Irish to be mad about potatoes?

If you move around on the internet, like you are doing now, you will no doubt stumble upon the words "Gutbürgerlich!" and "Hausmannskost!" (exclamation mark included). They are usually used, often in combination with the word "Herrlich!" (Delicious! Exclamation mark again!). Keywords. But what do they really mean?
The German "Gutbürgerlich!", or "good bourgeois" cuisine, stands for the ambitious domestic cuisine of the bourgeois middle classes, and has its origins in France. It was created in the 19th century during the period of industrialisation. The "gutbürgerliche Küche" differs from the manorial posh food culture on the one hand, and from peasant or workers cuisine, which is characterised by ingredient restrictions, on the other. The traditional bourgeois woman cooked herself and wasn't aided by any cooks or housekeepers. Since the housewife was not a professional cook, who nevertheless had certain standards and expectations with regard to the meals, the need for more in-depth knowledge concerning better food preparation arose.
By "Hausmannskost", literally "home cooking", or simple, hearty and traditionally prepared food is meant. In the preparation of home cooking, which also also includes dishes from the rural kitchen, mainly regionally produced ingredients are used. The dishes usually have a high energy density and are therefore traditonally particularly suitable for hard working people like farmers working the fields. Preparation and processing methods such as smoking, curing, and braising are frequent in this cuisine, because they make vegetables such as potatoes, peas, many kinds of beans, cabbage, but also meat easily digestible for the human digestive system.

So you're asking yourself what you will find at "Am Alten Fronhof"? We hope you allow us to answer your question with a reciprocal one:
What do you think is really important?
We at "Am Alten Fronhof" are committed to your enjoyment and satisfaction. We know that that sounds straight out of an advertisement and marketing text book. We suppose what we want to say is that we want to make sure that you have an excellent meal that gives you a rosy feeling, and leaves such pleasant memories that you will want to visit us again. After all, food is there to be enjoyed. Just like the good conversation you can have in our cosy, centuries-old taproom. That is all. No more and no less. And if that sounds "too crazy Cologne" and frivolous to you...
"Dat Levve es dozo do, öm genossen ze weede, esu lächle ens, un loß ding Sorje hück Ovend ens für d'r Döör!"
(Life is there to be enjoyed, so give us a laugh, and leave your worries by the door tonight!) 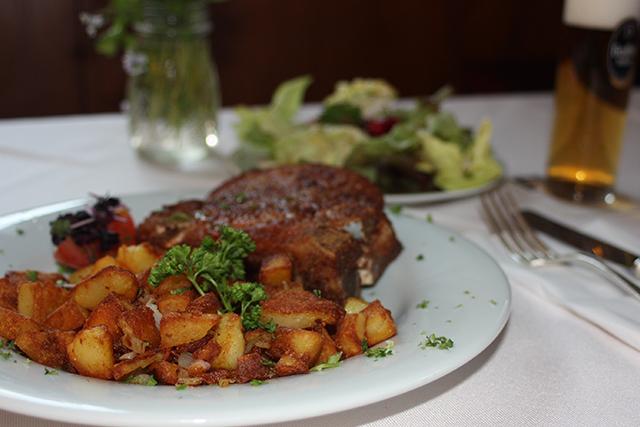 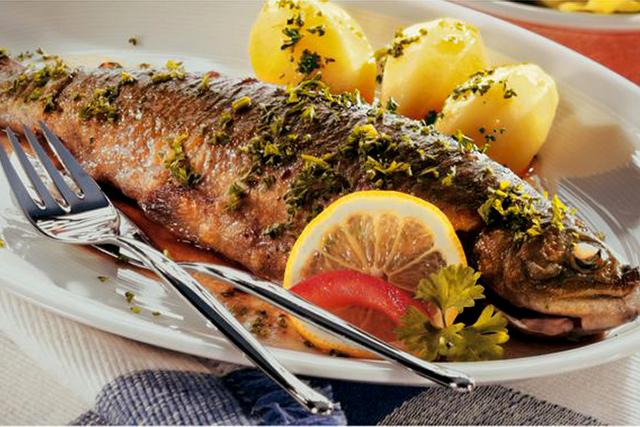 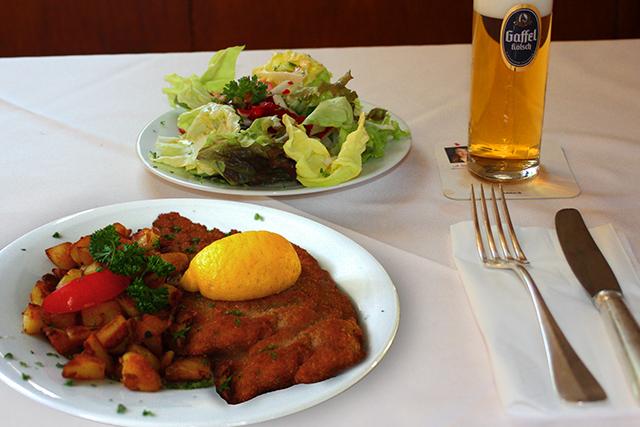 Please ask us for our continuously changing day specials!
On Tuesday we also servce fish, while on Friday "Am Alten Fronhof" only serves "Reibenkuchen", a local delicacy!